CAMERA brought Bassem Eid on tour to over a dozen campuses in the U.S. Please read below a review by a student reporter on the impact Eid made on her campus.

Founder of the Palestinian Human Rights Monitoring Group (PHRMG) and outspoken critic of the Boycott, Divestment, and Sanctions (BDS) movement Bassem Eid spoke at Cornell last week, sponsored by CAMERA on Campus and Cornellians for Israel.

“I am a human rights activist,” the speaker said as he started his speech, adding that he had never been affiliated with any Palestinian political organization. “I spent around 26 years of my life protecting the rights of the Palestinians.”

Born in the Jordanian-occupied Old City in East Jerusalem, Eid experienced firsthand the deterioration of the human rights situation under Palestinian Authority. This has prompted him to speak about major issues in Palestinian leadership and the complexities surrounding this topic.

Eid focused on the broken leadership in Palestine. He explained that Mahmoud Abbas, the President of Palestine, is anxious to appoint a successor to avoid the election of a president outside of his family. Meanwhile, Fatah, Hamas, and radical Islamists inside Israel are “competing” to increase violence in Jerusalem.

“Palestine is a very divided society,” Eid stressed, explaining that the conflict of leadership between Fatah, Hamas, and the Islamist movement in Israel creates a “competition” for the destruction of Israel. Since Hamas took over the Gaza strip in 2007, “We almost signed five different agreements between Fatah and Hamas,” Eid said. “We are so far away from any kind of union between Gaza and Palestine.” 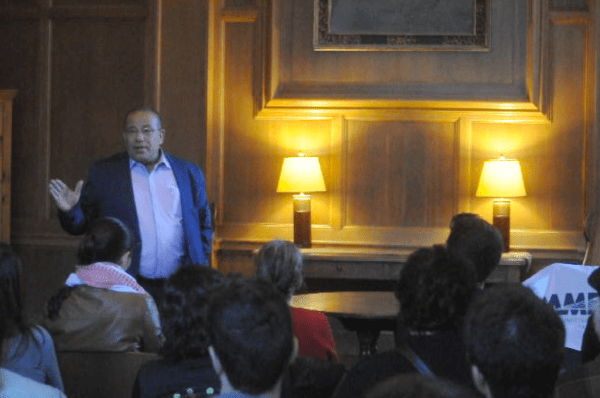 Bassem Eid speaks to a group of about 60 Cornellians.

“There is a fight between Abbas and Fatah, and between Fatah and Hamas… and between the radical Islamists inside Israel. We are in the middle of the sandwich. Fatah is trying to increase the violence in East Jerusalem for political interests against Hamas.”

Eid said that Fatah wants to show Hamas “You can just sit in Gaza and count how many Jewish we are going to stab today. Of course, the Palestinians will never ever achieve anything from that.” The Radical Islamists are also participating in violence in Jerusalem, and Abbas cannot interfere because it is in the interest of Fatah to keep the violence thriving, Eid explained.

Eid noted that social media today is radicalized and pinned against the innocent because of government censorship. “Whomever wants to stab a Jew” can be “directly guide[ed] how to do it,” he said, noting that those who are shouting against the violence are silenced.

When talking about a one vs. two state solution, Eid said that he believes that Israel and Palestine both deserve states, but “Unfortunately, the Palestinian demand right now is [a] three-state solution for two people, because Hamas is fighting for its own Islamic emirate in the Gaza strip, Abbas is fighting for his own empire in the West Bank, and the state of Israel… This is the solution unfortunately.”

Eid went on to say that the majority of Palestinians have lost trust in their government and leadership. If Bibi Netanyahu was to meet with Abbas today, Eid said, the first questions to ask would be, “Whom you are you representing, West Bankers, Gazan people, or Palestinians?” In Eid’s opinion, “Abbas is only representing his two sons and his wife.”

Now, there is an emphasis on how to deal with the widespread terror and unfortunately a de-emphasis on the human rights issue, Eid said. “The Oslo Agreement is going to bring another dictatorship regime to the Middle East,” with “huge violations of human rights” being committed by the Palestinians.

The speaker later discussed Palestine’s dependence on Israel for economic stability. There is “no interest in the boycott,” Eid said, referring to the BDS movement against Israel. He said that only with a better economy would the Palestinians do well, and that a boycott would “only harass Palestinians themselves.”

“Gaza is starving,” Eid went on, “And the main reason for that… is Hamas.”

Eid said that there is no clear solution, but that what is needed now is a “charismatic and courageous leader” to be interested in the people, which Palestine hasn’t yet seen. Meanwhile, Eid said, help is desperately needed from the international community to provide more help to Israelis and Palestinians to put an end to the violence that plagues the region.

A contrast to the more common anti-Israel speaking event at Cornell, it is refreshing to see groups like CFI and CAMERA bring speakers like Eid to campus, who are not afraid to speak the truth about Israel or the conflict in the Middle East.

This was originally published in The Cornell Review and was written by Cornell University student Laura Gundersen.